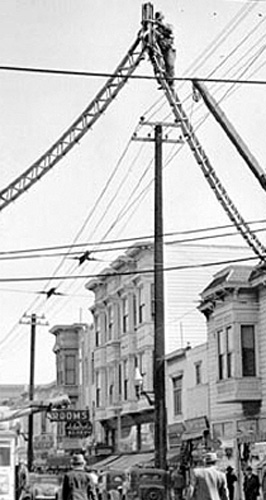 World War II and its Aftermath

Beginning in the late 1930s, many of the original residents of the Fillmore began to move to the suburbs. But the greatest change in the neighborhood came with World War II, when hundreds of Japanese-American families living in the Western Addition were sent to internment camps.

As the war continued, industrial workers flocked to the Bay Area to work in the shipyards and other wartime industries. African-Americans migrating form the South moved into Western Addition area housing left “vacant” by the interned Japanese Americans. After the war, many of those interned either did not or could not return to the neighborhood. It was not until 1990 that President George Bush signed into law a financial restitution bill and “a sincere apology” for the injustice done to the Japanese Americans interned during World War II.

In 1942, the illuminated arches along Fillmore Street were torn down for scrap to make steel for the war effort.

During the 1940s, dozens of jazz clubs opened in The Fillmore, among them the storied Jimbo’s Bop City. The music scene is in “The ‘Mo” was likened to the Harlem Renaissance. All the major musical stars of the era — Ella Fitzgerald, Duke Ellington, Billie Holiday, Charlie Parker, Charles Mingus, Gerry Mulligan — played at these clubs. Stationed in San Francisco during the Korean War, Chet Baker would sneak out of the barracks at Ft. Mason to jam all night at Jimbo’s. At age 18, saxophonist John Handy played Bop City with jazz giant John Coltrane.

In the late 1950s, Urban Renewal became the watchword all over America. The Fillmore was not spared. Hundreds of homes int he Wester Addition were demolished, displacing more than 4,000 residents. By the mid-1960s, community activism prevented further displacement. But much of the area sat empty of year until it was “modernized” with steel-and-glass apartments over ground floor shops.