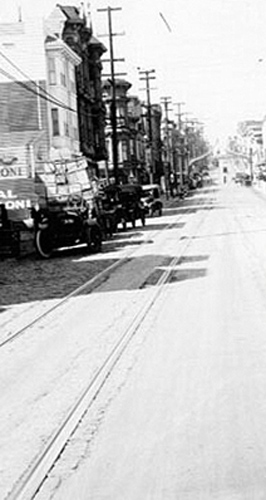 After the Great Earthquake

The neighborhood first rose to prominence in 1906. The great San Francisco earthquake and fire devastated the city that April. Within days, City Hall and most of the major department stores relocated a mile or so west to the closest thoroughfare left intact — Fillmore Street. Single family Victorians were turned into boarding houses, and the area quickly became a densely packed urban neighborhood.

Calvary Presbyterian Church, which in 1902 had fortuitously moved from Union Square to its present location at Fillmore and Jackson, survived the quake without structural damage and was afterwards used for many community meetings. It became the temporary home for St. Luke’s Episcopal and Old First churches, Temple Emanu-el and the Superior Court. In 1987, the church was placed on the National Register of Historic Places and designated as a city landmark.

Fillmore Street has always been primarily a commercial street, providing supplies for the servants to take back to big houses up the hill on Pacific Heights. Today, it continues to supply the divergent needs and interests of Pacific Heights, Japantown, the Western Addition, and the New Fillmore gentry.

The first streetcar to resume operation after the earthquake ran along Fillmore Street. In 1907, following a streetcar strike near a car barn on Fillmore, a riot broke out, and three people were killed. The day was christened “Black Thursday.” The streetcar’s brick powerhouse still stands at the corner of Turk and Fillmore.

In 1907, Mayor “Boss” Ruef, the chief of police and 18 members of the San Francisco Board of Supervisors were arrested on charges of political corruption. Ruef was jailed in a private home on Fillmore Street. There, at the request of his dying mother, Ruef confessed to the details of what historian Carol Chamberland calls “one of the most incredible tales of municipal government corruption in American history.”

During the post-earthquake development phase, theatres sprang up along the street, including The National, at Steiner and Post, which regularly featured a young singer named AI Jolson. After the earthquake destroyed Chinatown, the Japanese-American community relocated to the Western Addition. They named the area “Nihonjinmachi,” or “Japanese Town,” later shortened to its present “Nihonmachi,” or Japantown.