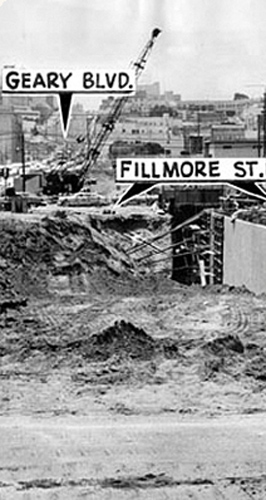 Give Me Your Tired, Your Poor, Your Talented

In 1911, the first Fillmore Auditorium was built. Initially called the Majestic Ballroom until 1938, it was home to dances, balls, and other events. Two years later, The New Fillmore Theatre, San Francisco’s first high-class neighborhood theatre, was built. Soon eight new movie theatres popped up in the neighborhood.

The cinema classic Greed, directed by Eric von Stroheim, was released in 1924. Many of the scenes were shot on Fillmore Street.

In 1925, Japanese monk Nyogen Senzaki opened an apartment-zendo on Bush Street in Japantown. This was the first regular instruction in Zen offered to western students. Senzaki and his Fillmore District zendo were key to the transmission of the practice of Zen Buddhism to the West.

For the next four decades of the 20th century, the neighborhood attracted immigrants who couldn’t afford to live in the city’s posh neighborhoods. Fillmore became one of the most diverse neighborhoods west of the Mississippi, as enclaves of Fillipino, Mexican African-American, Japanese, Russian and Jewish residents moved in. San Francisco’s Jewish population thrived there, founding three synagogues, a Yiddish Cultural Center, dozens of kosher butchers, restaurants, bakeries and shops. In a sense, the Fillmore District became a West Coast version of turn-of-the-century New York’s Lower East Side.

In 1909, the Fillmore Street Improvement Association, a group of Fillmore merchants, erected 14 electrically lighted steel arches over the street. Fillmore was dubbed “the most highly illuminated street in America.”