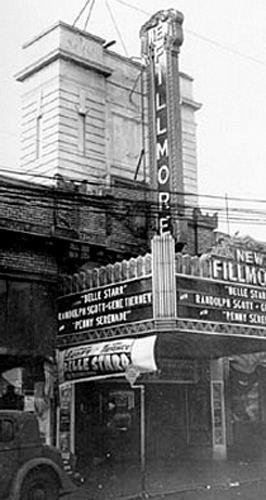 The Beats, Zen, the Panthers and the Dead

In early October of 1955, Beat poet Alan Ginsberg was at a second-floor space on Fillmore, typing postcards announcing an upcoming poetry reading at the Six Gallery at 3119 Fillmore. On October 13, he performed the first reading of his epic, “Howl.” Other poets reading that night included Kenneth Rexroth, Gary Snyder, and Phillip Whalen. This event has since been called “the night of the birth of San Francisco poetry renaissance.”

In 1959, the San Francisco Zen Center was founded by Shunryn Suzuki, a Buddhist missionary from Japan.

In 1964, Willie Brown began his political career when he won his bid for California’s 18th Assembly District, centered in The Fillmore. His campaign workers included George Moscone and Dianne Feinstein.

In the 1960s, jazz historian David Rosenbaum ran the Melrose Record shop on Fillmore. Working in the store was a young high school student, Marguerite Johnson, who later became a famous poet and playwright Maya Angelou.

On December 10 1965, the Grateful Dead made their debut at the Fillmore Auditorium. The following year, Bill Graham began renting the Fillmore and producing shows there. That same year, Jimbo’s Bop City closed forever. Standing in its place in what is now Japantown is a bank. However, the original building housing Bop City was moved and is now occupied by Marcus Books, at 1712 Fillmore, the city’s largest African-American bookstore.

The “Summer of Love” arrived in San Francisco in 1967. That year, the Jefferson Airplane introduced “Somebody to Love” and “White Rabbit.” Janis Joplin and Big Brother and the Holding Company were headliners at the Fillmore.

In 1968, Bill Graham opened the Fillmore East in New York City and moved his San Francisco operation to the former Carousel Ballroom, renamed the Fillmore West.

That same year, Japan Center opened in Japantown. It featured a Peace Plaza and five-tier pagoda.

In 1969, police raided the Black Panther headquarters on Fillmore Street. Mayor Joe Alioto later praised community leaders for calming the crowd of more than 2,000 who had gathered to protest the raid.

In 1972, a progressive preacher named Jim Jones leased a former Masonic temple near the Fillmore Auditorium and started a ministry centered in the Western Addition. It was called the People’s Temple. Jones’ ministry took a sinister turn and ended tragically in November 1978, when more than 900 people, many of them Fillmore residents, died in Guyana, victims of an idea gone mad. In 1989, the former temple building, damaged in the Loma Prieta earthquake, was razed.